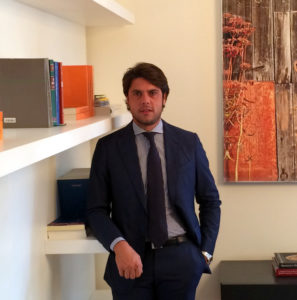 Filippo Morici collaborates with Comandè Di Nola Restuccia Avvocati since its foundation in February 2016, and before from 2006 to November 2009 collaborated with Siciliacque S.p.A. Law Firm.

He coordinates the department of Administrative and Accounting Litigation.

He is specialised in administrative law.

Throughout his career he has gained a wide experience in the branches of contracts, energy, construction and town planning, utilities, administrative liability of civil servants.

He graduated from the University of Palermo with a degree in Law in 2004 and he wrote a dissertation on Anthropological Criminology (‘Imputabilità e vizio di mente’), supervisor Professor Gaetano Ingrassia.

After his degree he completed his legal traineeship at the Law Firm of Luigi Alioto.
In order to broaden his theoretical knowledge he has attended a three-months in-depth intensive course on civil, criminal and administrative law at the ‘Sant’Alfonso de’ Liguori’ institute in Palermo.

Moreover, he attended and completed a university master’s degree in ‘Energy & Utilities management‘ organised by BIP – BUSINESS INTEGRATION PARTNERS that took place in Bertinoro – Cesena from May 2005 to April 2006.

He has gained the professional qualification in 2007.

Filippo Morici is in the Termini Imerese Law Society Roll since 2010.

According to the Regional Law of 31 August 1998 n. 14, art. 6 sub-paragraph 5 he has fulfilled the task of expert at the Presidenza della Regione Siciliana – Dipartimento Regionale di Protezione Civile (Regional Department for Civil Defence) and has taken part in the Proposal Assessment Core concerning fishery that applies to EFF 2007/2013 as legal external expert at the l’Assessorato Cooperazione Commercio Artigianato e Pesca – Dipartimento Pesca della Regione Siciliana (Cooperation Trade Craft and Fisheries Department for Sicily).