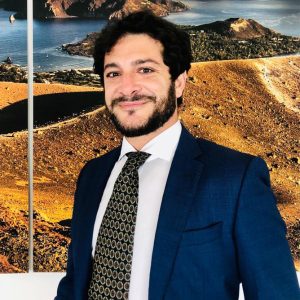 During his professional experience, he was a trainee at the Public Prosecutor’s Office and the District Attorney of the State Office in Bologna and a parliamentary assistant at the European Parliament in Brussels, working in the LIBE and ENVI committees on civil rights and environmental protection, as well as on the work of the first EU-wide commission of enquiry into the phenomenon of mafia.

<p”>In order to broaden his theoretical knowledge, he attended in-depth courses on civil, criminal and administrative law held by the State Councillor Francesco Caringella and the legal training course held by the public prosecutor of Modena, Dr Vito Zincani.

From 2012 to 2017, having qualified as a lawyer, he worked in the offices of the technical secretariat of the Presidency of the Region of Sicily and held the positions of board member in the public companies Sviluppo Italia Sicilia S.p.A. and Azienda Siciliana Trasporti S.p.A. and sole liquidator of Sicilia Turismo Cinema S.p.A.

He has written for several magazines and newspapers, including il Fatto Quotidiano, Europa, Sicilia Informazioni, Repubblica and Huffington Post. In 2014 and 2015, he studied philosophy at the University of Palermo.

He is currently a legal advisor to the Parliamentary Environment Committee at the Sicilian Regional Assembly and assists several companies in and out of court.

He speaks English and has a good command of French.