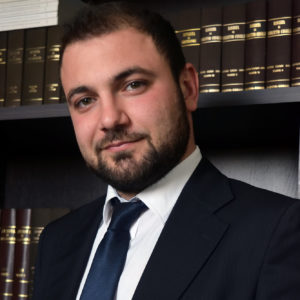 He is trainee lawyer since 2017, graduated from University of Palermo with a degree in Law in October 2017 with a dissertation on Civil Law (‘Il recesso di pentimento tra i rimedi e la disciplina contrattuale’), supervisor Professor Luca Nivarra.

In september 2017 he took part at Erasmus Programme, attending for six months the Aristotele Universtity, Thessaloniki, Greece. During his studies he participated actively in the life of student associations, covering the position of Vice President of Academic Activities in ELSA Palermo (European Law Students’ Association), collaborating in the organization of the “Moot court Competition” at the Court of Palermo. Near the graduation he took part in the university project “Viaggio e soggiorni di studio all’estero”, attending for two months the Institute of Advanced Legal Studies, in London, for a research activity aimed at writing the degree thesis.

He collaborates with Comandè Di Nola Restuccia Avvocati since November 2017.